The end is upon us!

I don’t know if it’s because things are constantly in the gear, moving forward, or the fact that I can finally see an end to this – either way, I really enjoyed this episode!

Min Ho acts nonchalant in front of Jeong Woo but is actually panicking inside about the discovery of Jennifer Lee. He demands his prosecutor minions to find Seok, in case he spills, but they can’t find him anywhere in the prosecutor’s office.

Old Prosecutor gets all worked up about how Jeong Woo is picking on Seon Ho again but splutters in silence when Jeong Woo asks why he’s so worked up if Seong Kyu’s murder was really just a suicide. “Who cooperated, who covered this up, who allowed a person to die in the prosecution office, and who fabricated it. It will be revealed soon.”

Fresh on this determination, Jeong Woo turns Min Ho’s villa upside down on a search for clues.Meanwhile, if you are wondering where Jeong Woo kept Seok, he had left Seok under the “care” of Cheol Shik, who hilariously buried Seok so that he can’t run away.

Yeon Hee knows that trouble is brewing again and worries that Min Ho will not be able to keep his promise of protecting her and Eun Soo. Min Ho wonders how Jeong Woo found out about his villa and looks at his secretary suspiciously.

The amount of luck and success in this episode is probably 10x more of what we would find in the past 16 episodes, because sure enough, Jeong Woo’s team find traces of blood in the villa. Jeong Woo approaches Seok and lays out all the crimes he did, including all the solid evidence that will be more than enough to sentence him to death. Putting his lawyer-y skills to good use, Jeong Woo then asks, “How much will Cha Min Ho get?” The answer is – nothing, because there is no evidence linking Min Ho to Seok, who did all the acts on Min Ho’s instructions and Min Ho will definitely abandon him. Min Ho gets called down to the prosecution, so Jeong Woo brings Seok back as well. Along the way, he keeps reminding Seok to reconsider about staying silent, “The only person I want to catch is Cha Min Ho.”

Faced with the weak evidence that Jeong Woo has linking Min Ho to Seok, Min Ho remains confident. He “runs into” Seok in the toilet and “worries” over him for going through so much. Although he accepts Seok’s apology for falling into the trap, he says dangerously with a smile, “This puts me in a tight spot. Seok, can you do something for me? I have a dinner appointment today.”

They resume interrogation, and Prosecutor Choi informs Jeong Woo that Seok has confessed to killing Jennifer. Jeong Woo works himself into a rage and demands to know where the weapon was hidden, if he really killed Jennifer Lee. Since Seok didn’t kill Jennifer, he had no idea so he asks Min Ho about it. 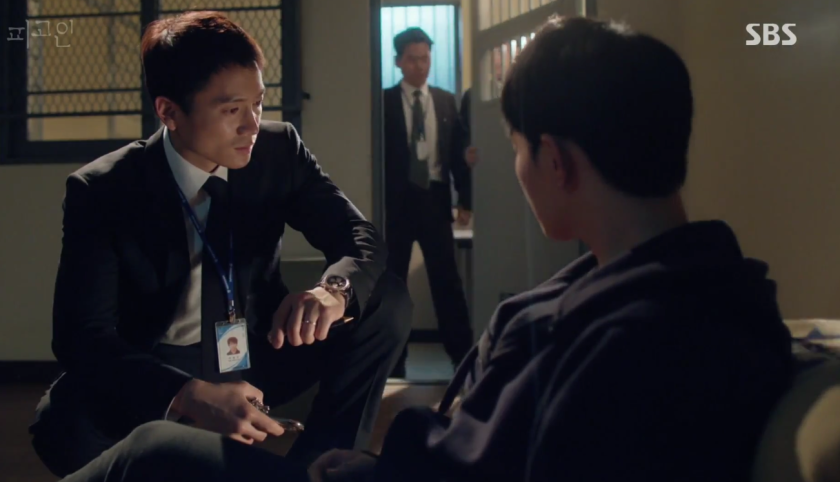 Jeong Woo has no choice but to release Min Ho, who makes a jibe at him. At night, someone sneaks into the detention center in the same manner as how Seok sneaked into Seong Kyu’s cell (boohoo:((( my dear Seong Kyu!!). Fret not, because that someone is simply Jeong Woo, asking for….Seok sits up and hands over the recording pen. Flashbacks show us that Seok was ready to cooperate right from the start and that’s why he confessed to the murder so that Min Ho would admit to where he hid the weapon. His voice and his confession was all recorded.

Jeong Woo’s allies wonder why Jeong Woo isn’t going after Min Ho right now, given the abundance of evidence. Jeong Woo explains that he wants to take Cha Min Ho to court, not Cha Seon Ho, and that there’s a way to prove that Cha Min Ho killed Cha Seon Ho. Min Ho is starting to go a little cray, hearing his father’s voice. I was wondering why only this murder would affect him and it hit me that it’s probably because his father was the one who made him the psychopath he is today and he’s still living in the shadows of his father.

Min Ho is ingenious, I’ll give you that. He goes to the pretty doctor and concocts a story about how sometimes he will cry out as Min Ho and people will mistake him as Min Ho. Pretty doctor diagnoses him with a split personality (omg don’t give him ideas!) and he suddenly remembers how his father is haunting him. 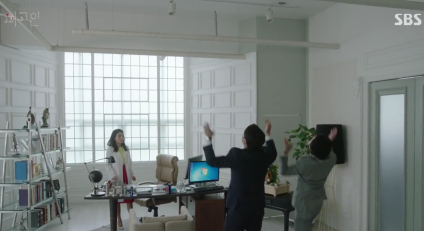 Mong Chi hilariously starts a business so that he can woo the doctor, and both him and Rockfish give her such a shock when they suddenly break into a dance. I must admit that it’s a little odd to watch Seo Jung Yoon as a psycho in Chief Kim and such a demure, pretty doctor here. She finally breaks into a smile. The secretary informs Jeong Woo that Min Ho visited a psychiatrist and opens the stairway door to find Min Ho outside. He keeps his calm, even when Min Ho takes his phone and dials the latest number. Instead of Jeong Woo’s voice, it was a girl’s voice. Phew~ After Kim turns his back, we realise that he had called Jeong Woo on another phone.

Joon Hyuk seems to have finally grown a conscience and this is when he receives a call from Ha Yeon who misses him. He finds her at her preschool but runs away when she notices him. Nonetheless, Ha Yeon chases after him and slips her hand into his, and there’s something about an innocent, lovable child that just hit you in the gut. Joon Hyuk breaks down in tears and apologises over and over again.

Now this part isn’t the clearest, but we do have a little twist here. Turns out Miryang had gone to jail to protect his colleague. He doesn’t want a retrial because he doesn’t want to break someone else’s peace…but that to me seems really problematic, because what about your family?? I remember the other cell mates mentioning about his wife and daughter? Also, I’m certain that you don’t go to jail for life/>20 years because you “killed” your patient. Medical negligence and liability doesn’t work like that, drama. [By the way, slight edits on this part of the recap – for more details, read my EP18 recap!]

Eun Hye finds the colleague anyway and hopes that she will testify for Miyrang’s retrial. Since the statute of limitations is over, she can’t be prosecuted but Miyrang will be freed. The colleague breaks down and confesses that she did attempt to tell the truth to the prosecution but the prosecutor told her it was too late and the investigation was over. No prizes for guessing who this prosecutor is yeah.

Jeong Woo approaches Yeon Woo privately in a plea for her to testify for the prosecution. Another testament of his lawyer-y skills, because Jeong Woo hits the nail on the head with a “What will your son remember about his father? I know that’s important for you.” In a quick twist, we see that Min Ho knows this already because he tapped in on the conversation. Yeon Hee remains troubled and asks Min Ho to join her for drinks. One thing’s for sure – Min Ho loves Yeon Hee. Instead of calling her out for her lie about “meeting a friend”, he asks if she will leave the country with him. Yeon Hee smiles and nods.

In a bittersweet scene, Ha Yeon asks about Seong Kyu and Jeong Woo lies that Seong Kyu thanked Ha Yeon for her drawing. Cheol Shik cooks up a feast and beams, “I used to work with knives” HAHA. Ha Yeon asks why there’s an ahjusshi with them and the three men look at each other awkwardly, before Jeong Woo asks Ha Yeon for permission to let this man stay since Jeong Woo made a mistake.

Jeong Woo receives a tip-off and rushes to the airport. Min Ho promises that nothing will happen and goes off to get their tickets but returns to find Yeon Hee gone. 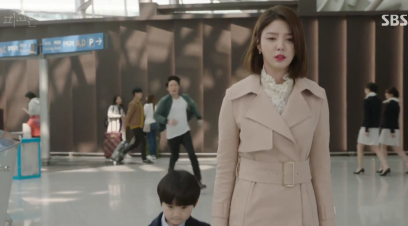 He rushes after Yeon Hee, and I must admit the feels here are pretty intense, as the detectives rush between him and Yeon Hee.

Jeong Woo then appears and Min Ho looks over his shoulder to see a crying Yeon Hee. She steels her heart and walks away with Eun Soo, while Min Ho struggles. “Cha Min Ho, you are under arrest for Cha Seon Ho. For soliciting the murder of Lee Seung Kyu.” Min Ho shouts through gritted teeth, “Cha Min Ho is dead!” and Jeong Woo lands the final blow, “And for the murder of Yoon Ji Soo!!!!!”

How does Ji Sung even manage to act in such a way that one (and only one) tear will fall to create an impact, is beyond my mortal brains to comprehend.

Haha. Jokes aside, yes I was pretty engaged through this episode, even if I saw through the Seok thing from the start. Kim’s phone got me though, because I honestly thought the game was over, and even when the person who answered was a female, I thought that Kim must have deleted the recent phone call. It didn’t occur to me that he would be using two phones.

That final scene has so much impact and I applaud the show for pitting one against another in their elements. Without this extension, we most probably would not have been able to see Jeong Woo arrest Min Ho in his capacity as a prosecutor (even if we did, it would be very condensed). So for this episode, I am thankful that they extended, just because we never really got to see Jeong Woo in action as a prosecutor and there is something fulfilling about watching Jeong Woo arresting Min Ho in his own power and own right. As for Min Ho, I love it that he’s torn between his hatred for Jeong Woo and his love for Yeon Hee in the same moment. Even when Yeon Hee walks away, Min Ho’s face doesn’t turn into a look of betrayal. At least for me, it looks like he is heartbroken and all he wants is to figure out a way to make Yeon Hee stay.

Now we just have the remaining finale to watch, let’s make the final run a good one!