A quick recap on Episode 8:

Yoon initially wants to leave Hwa Pyung in jail because Hwa Pyung was too rash, but later finds out from Priest Yang that his family died because of the evil spirit in young Hwa Pyung.

He finally understands why Hwa Pyung is so eager to track down Park Il Do and emphathises with him. Together with Priest Yang, they request for Park Hong Joo to settle with Hwa Pyung rather than press charges.

Hwa Pyung visits his grandfather back at the village and a grandmother comes knocking for help – her grandaughter is behaving in the same manner as young Hwa Pyung. Although Hwa Pyung’s grandfather chases her away, Hwa Pyung later privately finds out more details from her and visits the granddaughter, Seo Yoon. 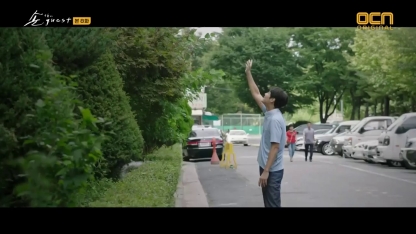 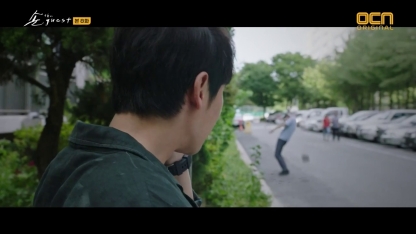 Shockingly though, Seo Yoon’s dad who is on the road waving up to someone in the house gets killed by a heavy rock that was thrown from above.

Through the grandmother’s help, Hwa Pyung manages to sneak a talk with Seo Yoon, and with Yook Gwang, deduces that Seo Yoon is a psychic.

She shockingly reveals that the ghosts who want to possess her tell her that they will be protected for their acts by “Park Il Do.”

Yoon later visits Seo Yoon and after more talking, the duo concludes that Seo Yoon is not yet possessed, but is dangerously on the tip of being so. She’s surrounded by a legion of ghosts since a few months ago, whom she has managed to keep out by running into her house each time. Because the ghost is uninvited, he or she cannot enter the house.

Seo Yoon’s mother, who desperately and adamantly wishes to believe that her daughter is ‘normal’, throws a fit when she comes home to find the duo talking to Seo Yoon. 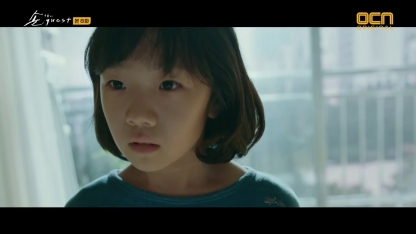 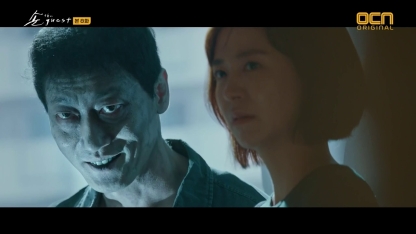 As she throws open the door to chase them out, a ghost comes right in and possesses Seo Yoon. GAH.

Thankfully, Yoon immediately chases the spirit out of her and the shocked mother finally accepts the duo’s help.

There’s a nice little moment between the duo, as Hwa Pyung is insistent that it wasn’t Seo Yoon who killed her father. He’s able to see what the possessed people do, but he hasn’t seen any sort of vision with her. Yoon reveals that he knows Hwa Pyung’s backstory.

Yoon calls for an exorcist priest to do the full exorcism for Seo Yoon, but the priest refuses to continue after concluding that Seo Yoon is unpossessed. Hwa Pyung thinks he’s mad for wanting to wait for the girl to be possessed first, before asking for permission from the council to exorcise, before exorcising. And boy, I’m with you on this one. Our dear Yoon steps up to his role and promises to do the exorcism instead, despite having been removed from the position of a exorcist priest.

Meanwhile, Gil Young is still investigating how Seo Yoon’s dad died. She receives news from Hwa Pyung that Seo Yoon has seen a bloodied female ghost in her 20s, in red clothes and yellow earrings every time she’s in her dad’s car. Detective Ko also points out that since 2 months ago, the dad had gone to the same site every 2 days to take a selfie. Gil Young drives down to the site itself, which turns out to be where a hit-and-run occured 2 months ago. She infers rightly that the female ghost Seo Yoon has seen was the ghost of the victim whom Seo Yoon’s dad knocked down.

At night, Seo Yoon screams for something/someone is knocking desperately on her window. Her grandmother opens the window to show her there is nothing, but Seo Yoon sees a ghost downstairs waving creepily at her.

She quickly pulls out a huge rock from underneath her bed and tells her mother that dropping rocks on them will chase them away, “I did this the last time, and the spirit disappeared.” Uh-oh! Also this is sad because the whole rock idea came because the doctor told her ghosts were illusions and not real.

At the same time, the trio realises that Seo Yoon hasn’t been seeing ghosts – she has been seeing her possessed father, who must have been approached by Park Il Do/Park Hong Joo when he went back to the site of the hit-and-run. I love this twist!! This is why she threw a rock to chase away the spirit, and therefore, indirectly killed her father.

Since her father’s dead, who will be a perfect body to possess now? All three of them, with a dropping of their hearts, realise, “A psychic.”

We then see Seo Yoon hearing her mother tell her grandmother that Seo Yoon killed her father with a rock, “She’s my daughter but she scares me.” Seo Yoon hears heavy knocking on the door. 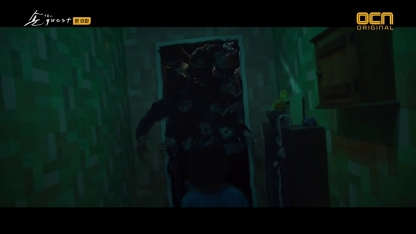 She slowly opens it, and coldly turns around even as they claw at her. 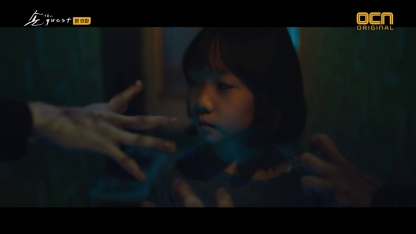 As she walks back to her room, the trail of ghosts follows after her…and her room door closes. 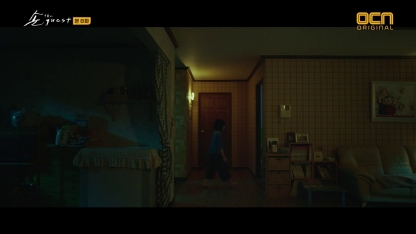 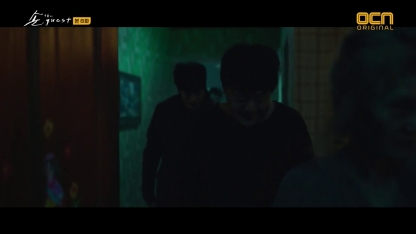 What a perfect, climatic ending!

Truthfully, I didn’t think I was going to like this one. People on my Twitter were full of praise for its first episode, which kinda flew over my head for being slightly confusing. On hindsight, I realise the confusion was actually the premise of the show – who possessed Hwa Pyung? Who possessed Priest Choi? Who possessed who?? in the first episode are questions which thread the plot and push the drama along. I get it now, but I do still have the gripe that clarity was somewhat overlooked in the goal of creating suspense. Even now, I confess to not quite getting how Hwa Pyung’s mother and grandmother died. Did young, possessed Hwa Pyung push the mother into the sea? Or did he simply keep quiet and watch as his mother ran further into the sea?

What I do like about this drama is that every episode is rather well-thought through, and has the aura of a horror film. The drama doesn’t try to please its audience (e.g fanservice, hot leads – but okay talking about Kim Jae Wook later – doing hot stuff) and simply just sets about its way to tell a story. This is what I like. Every time I press play, I feel almost as if I’m in a cinema watching the next installation of a horror movie. The Guest is quite unique because it brings what we usually see in a thratre onto our small screens and I can’t quite think of any other dramas that had the same vibe (this is definitely very different from The Ghost Detective or Lovely Horribly).

As someone who watched numerous horror films in her childhood, and then completely shunned them later, I also like the degree of horror in this drama. Just about nice enough to keep me on my toes, but nothing that will keep me awake at night. I don’t like gore though, so I do cover my screen whenever someone pokes his or her eye. Haha!

The last main reason why I like this drama has to do with the leads. It’s an odd mix of characters, but which combination works wonderfully – where else can you find a psychic, a priest and a detective at the same time? It’s definitely intentional, and I appreciate the thought behind choosing characters who will be incomplete on their own, but perfect when put together. Just the right amount of passion, impulsiveness, level-headedness, brains and practical skills.

I recently watched Kim Dong Wook in Along with the Gods 2, and his role as Hwa Pyung has a similar vibe – somewhat rash and impulsive, but at the same time, relatable. Kim Jae Wook is the perfect cold priest. I’m not sure if he’s supposed to be so hot at the same time, but anyway, his icy demenaour is great. Have never watched Jung Eun Chae before, but contrary to apparent criticisms of her acting, I find her really suitable for this tough, no-nonsense female detective role. Gil Young doesn’t come off as trying too hard, which is a pitfall some of the ‘fiesty’ female leads seem to fall into sometimes.

I also appreciate the addition of Yook Gwang in the mix. As a traditional shaman, he brings much-needed comic relief at appropriate timings, but also mirrors nicely the work which Yoon does as a Catholic priest. The show clearly recognises both types as legitimate and powerful in their own rights, which is quite interesting because I would think that from a religious perspective, both cannot coexist.

Of course, let’s not forget about Park Il Do. Okay honestly, I’m not a fan of Park Il Do’s style. I know he’s supposed to be a crazy villager all, but his image doesn’t really inspire any fear.  I can’t quite remember any examples now but there are certain portrayals of ghosts which scare the crap out of me, and I don’t think Park Il Do is that. My favourite bit of seeing him is when the crazy warden drew him on a drawing pad; that moment when Hwa Pyung identified the drawing as Park Il Do was so good. But seeing Park Il Do in Hwa Pyung’s dream a few episodes earlier? It was rather meh.

I think my top favourite possessed character in the show has to be the most recent little girl, Seo Yoon (Heo Yool) and that ending of Episode 8 where she just gave up and opened the doors to the FLOOD of ghosts. Very eager to see what’s going to come next!

Who do you think Park Il Do possesses right now (my dip is on Priest Yang, but is that too obvious)? Let me know your thoughts below!