You’d think that things will reach a peak and calm down just one episode before the finale, but no, Episode 15 brings us right into the core of another conflict, which will be dealt with in its finale. Yay or nay?

Continuing from last week, Tae Ho and Do Pal successfully get arrested. The group gathers jubilantly in Jae Gook’s room and all that’s now left is to clear Joon Oh’s charges. But like how Bong Hee feels uneasy that only good things are happening, so do I, and the drama pretty much goes down (as in mood-wise) from this point onwards.

Mean prosecutor demands that he sees Joon Oh first, but Prosecutor Yoon passes over information on the attempted murder on Jae Gook and smiles that he should do a good and proper investigation, “Everyone is watching you, so you’d better be careful.” Nonetheless, our mean prosecutors have already put their legs into the Tae Ho basket (ever since they concluded that Joon Oh, and not Tae Ho, was the murderer) and they are determined to stick by it. Isn’t this highly reminiscent of another drama? Yes, Defendant, I’m looking at you. More on this later. 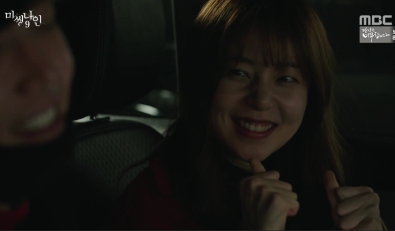 Hee Kyung is angry because her popularity has gone down after people think that she has screwed things up. A recent poll shows that she’s now second in choice for the elections. What I don’t understand is why Investigator Oh still works for her. 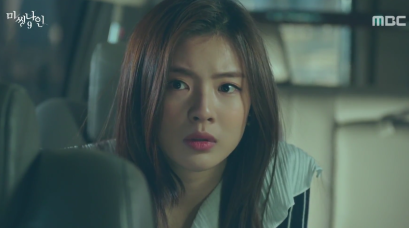 Our optimistic friends head to the prosecution to give their testimony, but each comes out feeling weird about it. It’s obvious what the prosecutor is doing – he’s discrediting their testimonies by insinuations. For Ji Ah, he wonders why her mum will be allowed to take so much money if she’s being threatened. For Ho Hang, he asks if he’s doing this to get another position raise. For Bong Hee, he suggests that she is a couple with Joon Oh, and only pretends to have memory loss so as to protect him. Tae Ho smartly strikes up a deal with Do Pal – say that you did everything and I was only threatened by you, and I will get out and deal with your henchman. Knowing that he will face 20 years or more in jail for attempted murder should his henchman be found, Do Pal agrees.

In the meantime, Joon Oh is worried about Bong Hee because she’s feeling down after the investigation. He hilariously covers the both of them with a blanket and murmurs about how talking to her is like talking to himself, “I feel alone if you don’t say anything.” He then kneels in front of her and thanks her,  “If it was any ordinary woman, she wouldn’t even last a day. You endured it because you’re you and you made it possible for me to endure it too.”

“Thank you. I’m nothing special, yet you’ve always trusted me, stayed by my side and protected me.” Aww. He even nonchalantly hands her a new lipstick as a gift! Although…where did you get the money from, Seo Joon Oh? *looks at him suspiciously* You know, this couple has gone through so much that what might be tumultuous for other normal couples i.e a normal dating life, is going to be so much simpler and sweeter for them. I really hope the finale shows us at least a little bit of this!! Just the notion of them going on a normal date makes me so happy on their behalf. Lol. I’m so lame.

Poop hits the fan when Tae Ho is really released and brings the henchman to a hiding place. Hee Kyung is happy, mean prosecutor is happy, all the villains are happy. Why? Because mean prosecutor releases news to the press suggesting that Bong Hee is abetting and protecting the murderer, Joon Oh.

Bong Hee’s mum sees the news and calls her daughter to come home. On the way back, Bong Hee faces criticisms from school girls, who are now ardent fans of Tae Ho again. Oh poor Tae Ho, how can this minx do such a thing to him? You know I’m sooo tired of immature school girls saying mean things, like honestly, just grow up and get a life.

Yoon is fired but he’s determined to keep the villainous prosecutors on their toes. The rest of the group have no choice but to cut off contact with Joon Oh because they are getting tailed. Bong Hee returns home to find words scrawled on her gate, “Why don’t you just die on the island?” Even the previous ahjummas create havoc by laughing that Bong Hee has fallen in love with a murderer. They shut up soon enough when Bong Hee appears though. Seriously………..I really don’t get why people have to go out of their way to upset other people? These are all clearly acts of provocation on the naysayers’ part; it’s all such stupid acts of bullying. Bong Hee didn’t do anything to you, and you are just selfishly building your happiness on someone else’s suffering. Bong Hee’s mum is heartbroken for her daughter but Bong Hee reminds her that she’s just like her mother – strong and soft-hearted on the inside, and that this is just a storm in passing.

She later calls Joon Oh and is shocked because he picks up on the first ring. HAHA. He watches her from afar and she promises to return the next day. 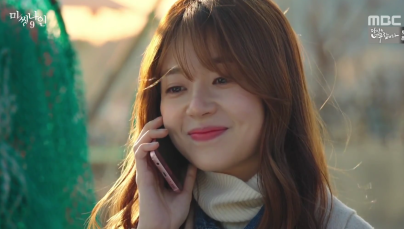 I thought he was going to confess but he ends up with a “Come back soon.”

The next morning, Bong Hee’s mum reminds her that she has to be strong herself in order to trust and support someone else till the end. Before things can even get better, mean prosecutor sends people to arrest Bong Hee. Prosecutor Cho hears about this and conveys the message to Yoon (who is now free from prosecutorial duties) and Joon Oh. Joon Oh immediately rushes off and reaches the bus terminal in time to see Bong Hee being captured. Thankfully, Tae Young restrains the man before he hurls himself at the police and gets himself arrested.

Bong Hee remains quiet in custody and it’s obvious they are planning to just keep her there without food until she ‘fesses up on where Joon Oh is. Basically, this is all a ploy just to get Joon Oh in the net. Tae Young knows this, Joon Oh knows this, but Joon Oh thinks it’s wrong that Bong Hee is sitting in there because of him. So he decides to turn himself in, much to Bong Hee’s horror.

She scolds Tae Young for letting Joon Oh go…but this isn’t just a pure noble, stupid sacrifice on Joon Oh’s part. In fact, both Tae Young and Joon Oh came up with a plan – get in there, but don’t say anything, till the prosecutor talks to you first. Then, ask for a favour to see Do Pal…and drive a wedge between Do Pal and Tae Ho.

So here comes 30 seconds of comic relief, seeing Joon Oh fooling around. The plan does go through pretty successfully, and he gets to meet Do Pal. He smiles that Jae Gook is able to talk now, and that Tae Ho isn’t doing anything for Do Pal. Do Pal leaves in irritation but Joon Oh slams him into the door.

This episode brings a few points to mind. First, let’s talk about the prosecutors. I’m very curious about this and if anyone has the answer, please let me know! Is there a general distrust of prosecutors/law-enforcing authorities in Korea? I’m genuinely asking this because the corruption of prosecutors has been a major issue in many dramas throughout the years. To me, it’s no more obvious than right now when you have Defendant, Missing 9 and even Chief Kim (to some extent) at the same time. Joon Hyuk in Defendant is behaving based on the same premise as the mean prosecutors here (My investigation cannot be wrong!); Seo Yul in Chief Kim doesn’t irritate me as much because he’s not claiming that he’s right. He’s just manipulative and powerful, in another manner. Taken in totality however, it does make me a little more worked up than usual when I watch the prosecutors going about in their self-righteous ways. I don’t live in Korea, so I’m really interested in this. The idea that people can just ride over justice because of their own selfish desires and motivation makes me grit my teeth.

Now second, let’s talk about this new conflict. I think it isn’t ‘new’ and hints have in fact been laid out in the previous episodes. The mean prosecutor, from the start, refuses to do a proper investigation and the fact that he links up with Hee Kyung only cements this notion. I think Hee Kyung is a lot more interesting in the past when she treads in the grey. Now that she’s also motivated by her election and her own needs, I’m bored by her but also disgusted with her. If you guys remember, she did have that half-episode of goodness before Tae Ho returns. I wonder why Tae Young can’t threaten her again? Anyway yes, I think this conflict comes naturally and it comes as no surprise that the prosecutors decide to stick with their decision till the end. Infuriating, but not shocking. What I do wonder, is how the drama is going to resolve this satisfactorily in the next episode, which is also the finale. Will Do Pal change his testimony? How effective will that be even if he does, seeing how the prosecutors are able to manipulate testimonies? Why will the prosecutors suddenly have a change of heart in seeking out the right murderer? I want them to be punished, not to be sudden good guys, do you know what I mean? That being said, I do appreciate that the script carries plot right the end. I don’t really like dramas which resolve by the second last episode, and spend the last episode just on happy endings (Sensory Couple is one example). For me, it kills the pace of the story and the tightness of the plot.

Lastly, is Joon Oh being a noble idiot as per 10000 dramas before him? I don’t know. Sure, I look down on cliches of someone pulling a noble idiocy thing in the form of – I will leave you so that you can be happy -, after which they proceed to have a last picnic/last date and the party who is being abandoned never knows about it until the next day when the significant other disappears off the radar. But here, I can see where Joon Oh is coming from, even if it’s not the wisest move. I don’t think he thinks Bong Hee will die inside or that she can’t take the investigation process. Rather, what I felt was his keen sense of guilt for implicating her when she has done nothing but good. Besides, you can simply feel the urge of protecting someone if you love the person, it doesn’t have to do with anything about her being weak.

Let’s see what the finale will bring us!