I’ve never written a theory post on Pretty Little Liars even though I’ve been on it almost since the very start (and so has this blog), but I just thought it would be apt to do one up now because the show is ending. Yep, for those who haven’t been following, Pretty Little Liars is finally finishing next week!! I’m still in disbelief because I grew up (kinda, not really) with this show, but at the same time, I can’t wait for there to be some closure. Good closure. But read on to find out why I think what I think about Spencer. Or her Twin!

I’ve been catching up with all the episodes, theories and posts and I felt like I’ve never actually read one which takes this particular angle that I’m about to show you. But if there was, and this is just another boring Spencer Twincer (sorry Tumblr, borrowing the term here!) post to you, I apologise and good day to you!

In this post, my point is just really simple – there’s one constant indicator as to when Spencer’s Twin appears and that’s her hair. You would find accompanying clues, but when I was spamming episodes at one go (without having yet read any theories), her hair was so obvious to me, and I’m about to show you why!

As a starting point, if Spencer has a Twin, she most likely appeared in this scene and this scene alone is enough to convince me that there’s a Twin who met Ezra at the airport (7×15).

Notice the super straight hair with jet black clothes? Not Spencer’s fashion style and definitely not the hair she’s been sporting before and after! Like here:

still straight yes, but a lot messier than the airport scene right after

Nice curls in the episode after!

I guess it struck me instantly because Spencer’s hair at the airport looked like it went through fiery steaming straightening irons. The way she talks to Wren also feels more like two people who have been in contact constantly. It’s also my guess (and many others) that it is Spencer’s Twin who approached Toby at his cabin. Once again, straight hair with black clothes: There’s something very off with this scene because –

Before – top and jeans

After – black dress with a black jacket!

To further prove my point, let’s take a look at Spencer after the cabin:

Jeans, blazer and a top

It’s possible my/our theory is wrong because Spencer isn’t wearing the top that she wore to Aria’s, but in my opinion I think that’s because the producers don’t want to be TOO obvious about the Twin – and if we have Spencer in the same clothes she wore to Aria, everyone would have known something was wrong or at least be confused as to why Spencer was in a black dress just the scene before. Also note the hair – it’s back to wavy!

To finally seal the package, here’s a tweet from Marlene which Tumblr and Reddit users have been discussing: Why? Because “watch” closely – Spencer’s Twin doesn’t wear the watch! Remember the scene right above when Spencer smashes the phone? She has her watch. Scroll up above and you would see that her black dress twin doesn’t.

Of course, hair could be deceiving. Sometimes they just don’t plan it down to the detail as to whether she has straight hair or not. Yeah I get it, but I think just because Spencer may have straight hair sometimes, doesn’t take away the possibility that the two most suspect scenes above involve her Twin. The producers may have crafted the image of the Twin in their minds and stuck to it, but slip up and cause Spencer to also have the same attributes in some scenes.

At this point, I should probably stop writing because I feel the most confident and sure about the above two scenes, that that’s not Spencer. But here’s where I’m just throwing a few questions out…just because. I wonder, what if we limit the defining Twin attribute to the straight hair?

That would mean that the below scenes are all not Spencer, but the Twin: 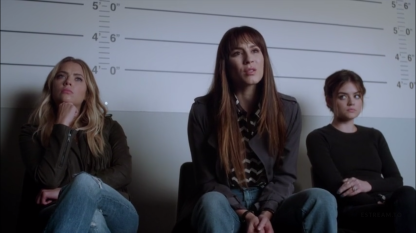 It made sense to me initially because I felt that Spencer was too detached about Furey when talking to Tanner. Her reaction didn’t look like someone who had something to hide. Maybe because she…doesn’t? It still made sense when Spencer gave out burner phones. (Not sure if they actually address this but) how does she get so many at the same time? I thought I was onto something when I saw a straight-haired Spencer meet Toby – because that’s where she heard Toby’s offer and also sounded out what Tanner was up to. But I wonder just how long this could go on because that means Spencer would have been intercepted for the whole day and I can’t think of any reason why she would go missing. Besides, the Spencer who met Toby had a watch:

And continued to have the watch for the whole day basically. Those scenes still come off as a little suspicious to me which is why I feel that maybe the only attribute of the Twin is the hair, and not the watch, but of course I’m not sure about this and am most probably wrong.

Now let’s zoom in on one specific night of Spencer and hypothesise that both the hair AND the watch are clues. After the smashing of A.D’s phone, Spencer appears in straight hair again when Haleb traps Mona. She is wearing the right clothes yes, maybe the styling manager whimsically decides to put Troian under the straighteners again yes, but she doesn’t have the watch anymore. What if Spencer’s Twin was the one who sent the Leave Now message? We never saw what the girls were doing while Caleb was talking to Mona! And here’s an interesting note – Spencer wasn’t wearing her watch either when she met her mother.

So either PLL’s wardrobe management sucks (such that they can get every single piece of clothing right but not the watch – come on, this is Spencer throughout the same night, how can she just lose a watch?) or this means something. It could mean that either Mary doesn’t know Spencer has a Twin i.e she thinks she’s talking to Spencer, but Spencer’s Twin was the one who intercepted or that she was in fact talking to the Twin but we had no idea.

I also felt that Spencer handled the news of Haleb’s marriage more like a ‘bro’ or a friend, rather than as an ex-girlfriend. I know, this is a drama, it’s not real…but I just cannot imagine how someone in Spencer’s shoes would feel! Yet this girl manages to react with a joke “No wonder you don’t want her going down anymore holes” and a punch. 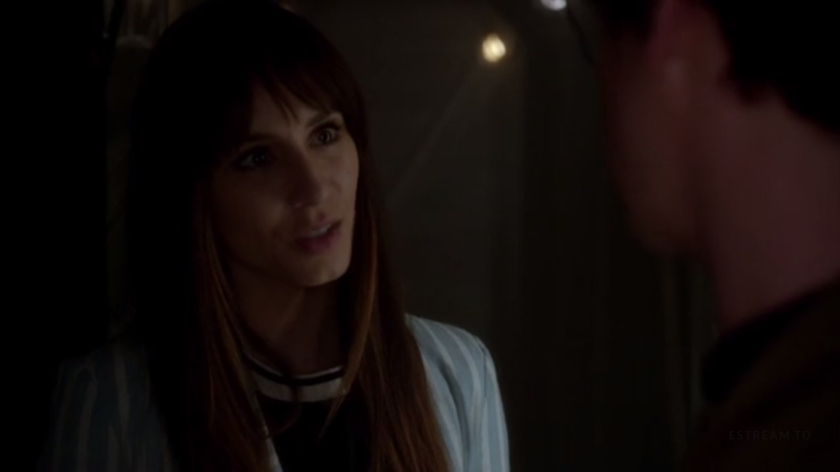 I didn’t go through more straight hair scenes because I think these are enough to prove a point. Either the straight hair (by that, I mean neat ironed hair, not the messy fizzy hair that sometimes stressed Spencer has) /watch is a huge clue or they just messed up – in a sense that they meant them as clues for the two most suspect scenes but also accidentally included them in other scenes (especially of the same night).

At the end of it all, if Spencer’s Twin is for real, I sure hope there’s a proper reunion/kiss/hug between Spoby. It is sad if Toby wasn’t actually kissing Spencer in the cabin because that whole sequence was about being with your loved one before time runs out. It will also make scenes such as Spencer’s acceptance of the marriage between Haleb meaningless. At the same time, I honestly can’t believe that the connection between Spencer and Caleb on “to whom” wasn’t real. That moment felt genuine.

Well I really enjoyed writing this post! It ended up less as a theory post and more of a discussion one. Whether anyone reads it, I’m happy that I at least dedicated a post to a drama which has been such a big part of my life. Hanna and Caleb are one of my all-time favourite couples. So is Spoby (but I was and am never a fan of Ezria oops) and Spencer is my favourite PLL character.

Regardless of who A.D is, I hope that the finale will go out with a good bang and leave us all being nostalgic and sentimental that this has ended, rather than oh good lord it finally ended.

Till then, take care everyone!