Things are getting really exciting!

[I realise that there’s probably no way I can finish this recap before Episode 15 comes out, but because I still like this episode a lot and want to hear what you guys think, I’m going to publish what I have done and more importantly, my thoughts on the show! I may or may not come back to finish the recap, but for all purposes, treat this like a review.]

Ma Wang wonders if he’s dead but he keeps hearing the crazy monkey’s voice calling out his name. His eyes burst open and Oh Gong heaves a sigh of relief, fearing that he has died. Turns out that Ma Wang collapsed from taking on 88 strikes – Oh Gong took 9 and Bo-Ri took the last strike. The camera pans out to show that Bo Ri has collapsed just from the one strike hahaha.

Ma Wang asks why it’s so cold and dark, and that’s when they realise that Ma Wang can’t see anymore. On the other side, Ah Sa Nyeo is determined to have the urn which already so conveniently has Sam Jung’s blood inside. Just when they are thinking about how General Frost can obtain the urn, PK dashes in to ask where Summer Fairy is – because Ma Wang is so cold that they needed the warmth of the fairy. Ah Sa Nyeo hears from a side and smiles; this is the chance they are looking for to infiltrate the house.

Although it’s a sad thing that Ma Wang lost his eyesight, they somehow manage to turn it into comedy nonetheless?? HAHA. I really laughed when I saw how Ma Wang clutches so tightly to Oh Gong’s hand, and how Seon Mi tells Oh Gong not to reject him. Ma Wang asks about the Princess Iron Fan, and is told that she has passed away peacefully – not in the midst of killing for revenge, or with blood on her hands. Ma Wang is relieved and hopes that she reincarnates to be a flower in her next life.

Ma Wang whines about the cold and Oh Gong loses his temper, telling him to visit a sauna instead. Secretary Ma arrives with messy hair and in a frenzy because she she fell into a crevice while finding medicine for Ma Wang. Although Ma Wang superficially feels bad for eating all the medicine for himself (oh…I should give some to the monkey!), he stuffs it all in his mouth. Secretary Ma guiltily rushes away when Oh Gong asks her for some medicine too.

Seon Mi notes that once the demons pledge allegiance, they are very faithful till the end. Such faith is non existent among humans. Oh Gong smiles and replies that if anyone betrays, they have to use their lives to compensate. I wonder what’s going to happen to General Frost?

Summer Fairy finally arrives, much to Ma Wang’s happiness. Speaking to Summer Fairy in blindness, Ma Wang suddenly remembers how she used to look like in the past. The conversation then cuts to PK, Oh Jong, Oh Gong and Seon Mi in the dining room, where the three demons reminisce about how pretty Summer Fairy used to be. Seon Mi learns that the fairy was initially a separate person from General Frost, and that she’s VERY pretty, much to her jealousy hahaha. Without taking cues from PK to keep his mouth shut (“oh Oh Gong-nim wouldn’t be interested in the woman no matter how pretty she is”), Oh Gong rambles on about how scarily pretty Summer Fairy was and Oh Jong adds fuel by revealing how Oh Gong stole peaches for this fairy. Seon Mi leaves in a huff, much to Oh Gong’s confusion, but he quickly chases after her when PK enlightens him about what he did wrong.

The other two point out how different Oh Gong has become and how much he likes Sam Jung – instead of muttering “FIREEE”, he skipped the fire stage and ran after Sam Jung. Hahaha. Oh Jong then asks if PK knows how the siblings end up sharing the same body, to which PK shakes his head, but this means that we will know the answer soon!

Since Seon Mi jumped into a cab so quickly, Oh Gong waited in her house, in case his sudden appearance in the cab caused a car accident or something. He tells her that it doesn’t matter who was pretty in the past, since he only finds one person pretty now that he wears the Guemganggo. Sam Jung is not satisfied because of the Guemganggo and presses him to think about her when he hadn’t yet worn the bangle. Oh Gong stutters a little and Seon Mi pouts, “I was just prey, so it was just about whether I was deliciously-looking or not right? What…I’m not fried chicken.” Hahaha.

Oh Gong knows that Seon Mi is worried that he wouldn’t find her pretty anymore after taking off the bangle, but he thinks it’s not a problem so long as he doesn’t take it off. It’s his will not to take it off, so that’s real. I guess that’s true? But on a side note, it sounded a bit like Stockholm syndrome too hehe.

Seon Mi is appeased and tells Oh Gong he can go, but he gives her a back hug as she turns away. He likes appeasing her when she throws tantrums, and now he finally realises what’s the normal life she wants. “The Great Son Oh Gong sincerely loves the human Jin Seon Mi. I love you.” He turns to leave after saying this, and Seon Mi pulls him back, saying that as friends, they would go for a drink; as parents, they would give the child allowance; as a couple, “You shouldn’t leave after coaxing.” That sounds so strange and full of tension like if this was any other drama, the next scene would have been them in bed, but I loved it that because it’s Jin Seon Mi and Son Oh Gong, it didn’t turn out like that.

-this is all I’ve accomplished-

I like how the different plot lines start to intertwine, such that it seems to bring us to this one point – if not for Ma Wang, Sam Jung’s blood wouldn’t be in the urn. Without Bu Ja as the host body, Ah Sa Nyeo wouldn’t be walking around for so long and also attracting the attraction of Kang Dae Sung. I appreciate the thoughtfulness that goes into it, but perhaps because I’m not as into Ma Wang’s plot as I should be, somehow there’s this niggling feeling that Ma Wang’s love for Princess Iron Fan was mostly just to bring us to this – to create a situation where Sam Jung’s blood would have a legitimate reason to be in the urn. 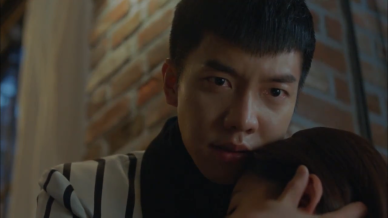 I’m really enjoying this drama because of the evolution in the couple’s relationship. However, I must admit that most of this enjoyment comes from watching Son Oh Gong. I guess it makes sense because Sam Jung kind of represents eternal loyalty and kindness. I rarely re-watch scenes from dramas nowadays, but that last scene where Oh Gong clutches Seon Mi’s still body and urges her to summon him is so wistful that I just had to replay it. 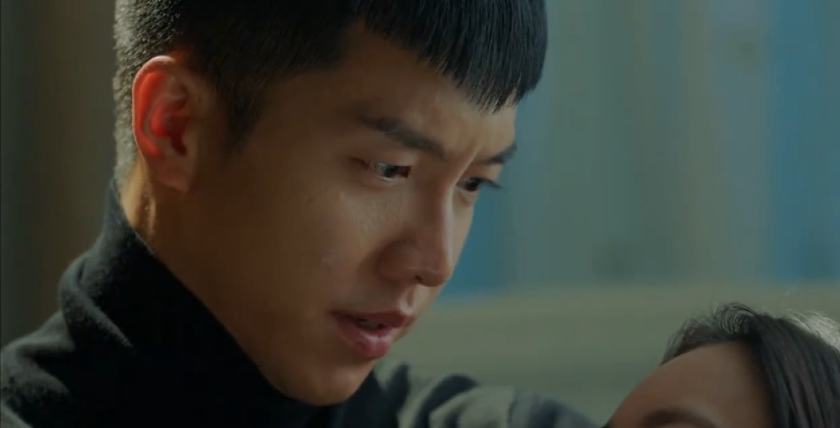 There’s such a strong quality of fear and yearning that I can feel how lost and scared Oh Gong must be, not knowing how to help or where Seon Mi is. This is in such a sharp contrast to all the different sides of Oh Gong we have seen so far (the cheeky, the annoying, the angry, the loving sides) and it makes me want to cheer him on so much! The summoning of Oh Gong which he saw in the past as a shackle on his freedom, he now sees it as his unique connection with Seon Mi. I love even more that they reciprocate this connection and protection with the idea of a wedding ring, such that Seon Mi also has a promise to Oh Gong now.

As for Seon Mi’s decision to take over Ah Sa Nyeo’s place, I’m not quite sure what to think of it yet. On the surface, this is yet another noble idiocy scene, but I think it is pretty in line with her character. She’s a simple girl, with strong feelings of compassion and love. The fact that she hears about the death bell from Ah Sa Nyeo must have been even more traumatising, thus affecting her decision-making process on the spot. I guess the fact that she’s alone also means that she has no one else to stay alive for.

Regardless, I appreciate her decision just from a plot point of view, because boy things got so exciting!!! I wonder if Ah Sa Nyeo will really take over Seon Mi’s body. If so, I want Oh Gong to realise that this is not the Seon Mi he loves anymore!

The only thing I wish could have been better was that all the characters should have put together the clues of the scent/temperature – PK smelt the lotus scent from Bu Ja, Ma Wang CLEARLY pointed out who was Ah Sa Nyeo and who was Sam Jung from the direction of the scents, Ma Wang felt cold suddenly one night etc. If there was a short scene just from them inferring the right conclusions from these clues, the ending would have so much more impact, rather than them inferring from other form of clues such as having seen Ah Sa Nyeo being with General Frost, and that Summer Fairy is not at the bar despite it being night time. Perhaps, the clue of the scent will have more importance in the next episode, because right now, the characters still have no clue what Ah Sa Nyeo wants to do.

My last question though, is what if Bu Ja being in the body has more relevance than we thought? When Ah Sa Nyeo’s soul leaves Bu Ja’s body, so as to enter into the dream scene with Seon Mi, shouldn’t Bu Ja’s soul have taken over? Or does Bu Ja’s soul attach to Ah Sa Nyeo’s now? I think the answer to these questions can possibly affect the plot.

We will know soon!