I’m kinda glad that this started when I just about finished the work I had in November because boy I am hooked on this. So my favourite type of drama is this – while there are occasionally outliers, I mostly favour dramas with a gripping plot (possibly in line with mysteries and fantasy being my type of genre to read), beautiful cinematography, good acting and clear direction. Everything has to be in there for me to fall in love, and right now, Memories of the Alhambra has all of that.

Who knew it would be so good? Because before it started, no one had a clue on what the plot was going to be about, and the trailers kept mum. (Haha my favourite tweet on this was how someone pointed out that all the trailers looked like a tourism board’s video).  But I’m so glad that the surprise was so well-kept because 30 minutes in to the show, when Jin Woo’s eyes flashed, I felt a jolt of excitement – this show is about VR, AR and AI.

I’m also a little mindblown because I love how well-structured the development is – just like a game! It feels like someone really sat down and wrote out all the rules as if they were producing a real game, and the variables that could be thrown in. I would be impressed if they had consulted real game programmers or if someone has some gaming experience. It totally feels like that! The graphics are realistic and the acting totally just carries it through. This is kinda like W: The Two Worlds but a better version of it.

I’m honestly not a big fan of Park Shin Hye – I watched most of her works and enjoyed the works, but not her in particular. But this might just prove me wrong. Her role as Hee Jo thus far is pretty cute and decent, none of that frail-damsel or overstepping nonsense, just a normal girl working hard at life. And her entrance as Emma?

Just wow. Even though we have seen it countless times in the trailer, I love, love how it was portrayed in the drama and those graphics really made me feel like I was in a game.

Also liked the way she jumped when Jin Woo’s body plummeted down the floors – cos it made me jump too.

I love how each episode has an equal mix of fantasy and reality – up till Episode 4, you can kinda see a shift at the 30 minute mark, but as with further development, I’m expecting to see fantasy spills over into reality. Although sometimes a tad not too smooth, I do enjoy the way the show cuts in and out with future and present, or past and present for a fuller picture. That vision at the end of Episode 2 already sends chills to viewers, knowing that there’s going to be a showdown at it all. And I love that every time the train rolls into the station, the skies get dark with a thunderstorm overheard. 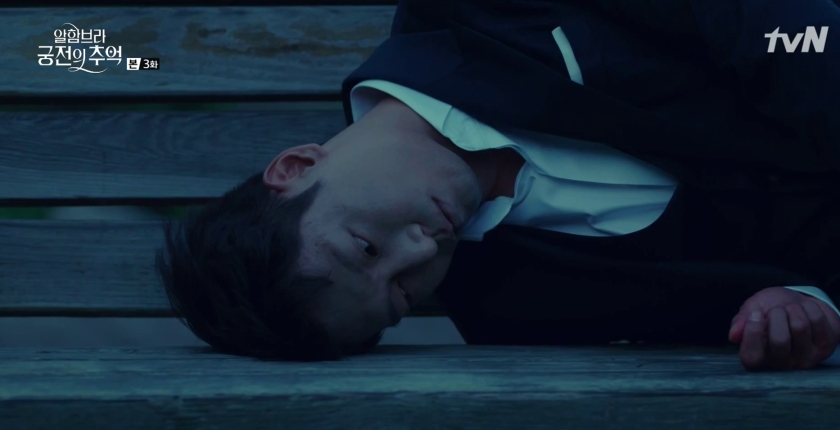 Even though I kinda expected that twist at the end of Episode 3, I still thought it was AMAZING how they executed it and Jin Woo’s face of horror when he heard that CEO Cha is dead – Hyun Bin’s acting killed it.

I also liked how they introduced the reason for the title so early on in the show, and had chills when it literally comes back to haunt Jin Woo at the end of Episode 4.

What a perfect choice of music to be the theme of this show – someone must have done their research.

All of this being said though, I do have questions over what I would term #chroniclesofthecontactlens – is Jin Woo ever going to wash his hands before popping them into his eye? Is he going to wear them to sleep?? Questions, questions.

But jokes aside, I guess my true question is  – why couldn’t he have just taken out the lens in order to avoid dying in the game? I know this means that he effectively will not be able to play the game anymore, but surely that’s better than dying in reality??

Despite the heavy overtones, there’s occasional bits of fun and comic relief that I also totally love. Can’t wait for more!!