Here’s a review of the drama,  as well as the books the various plots are based on!

I’m a huge Agatha Christie fan so you have no idea how delighted I was to hear that there’s a K-drama officially based on the Ms Marple series. It’s my personal goal to finish all her books so although I’m not there yet, I managed to spot the books which the book is inspired by. Before sharing my thoughts, here’s a list of the books the drama is based on – I highly recommend to read them and spot the parallels!

I’m not sure which book the overarching plot is based on and I’m wondering if it could be Nemesis. Haven’t read that yet and don’t want to spoil myself, but once I find out I will update this post!

Okay so now onto my thoughts (spoilers ahead)

The not so great stuff:

Truthfully, I’m not sold on this. I thought it would interesting to see how they gave a twist on a gossipy, wise but generally mild old lady and turn her into a modern, intense woman. But at the end of the day, while I appreciate the change in tone, I’m not sure I’m a fan. The way Ms Marple solves her crimes is uniquely her style in that she often sees similarities between the current situation and people she knew in the past, thereby being able to predict outcomes with striking accuracy. They tried to do a little of that in this drama by having Ms Ma being an expert on human behaviour, but she lost most of that touch through the middle.

I am aware that having an old lady as a lead wouldn’t make a fun watch, but as a matter of personal preference, the intense revenge didn’t quite bite with me. And that’s also got to do with my gripe over the overarching arch – there’s quite a lot that didn’t make sense or weren’t realistic at all, and for a show that’s premised on mystery and details, it should have been more careful. I just can’t quite get over the fact that they killed a child to be a replacement child, but killed the original daughter too. There was no sense in that. Even if the counter-argument is that without such a lie, Jang Cheol Min wouldn’t have agreed to the plot, it’s a weak counter. For you could easily get around it by lying to Jang that you are going to kill the replacement child but in fact killed the daughter. In essence, Soo Ji’s death was an absolute waste.

I also didn’t like how people were just dying all over the place in the last two episodes. Sure, Ms Marple’s stories are dramatic but she’s always quite detached from it all and the drama never taints her. Here, the overarching story itself resembles a Shakespearean tragedy and one moment, the policeman dies, the next moment the husband dies, and the next everyone dies. Bang bang bang, here’s a death for everyone! There was also just way too many scenes of Go Mal Koo fighting off thugs – how many times do we really have to watch him take off his blazer and end up with a bloodied head, worn out but undefeated? The ending episodes were poorly handled in my opinion and were both unravelling out of control and simplistic at the same time. It’s not like Agatha Christie’s stories made sense all the time, but I sure hope they wouldn’t justify the lack of clear direction by that.

My last gripe is that as a smart female lead driving the story, many a times, I felt lost when Ms Ma falls for threats with no back up plans, or let her emotions get in the way. I feel for her role as a mother, but the repetitiveness makes me feel like it’s just the show milking Kim Yunjin’s acting as much as they can. It therefore kinda drags and takes some of the fun out of Agatha Christie’s characters.

There were however things I enjoyed. It was still fun to watch how the stories in words were transformed into something life and moving. For example, Marina Gregg’s look of horror and distraught is something quite central to The Mirror Crack’d from Side to Side, and one of the clues which helped Ms Marple solve the mystery – so it was nice and rather exciting to see the drama’s interpretation of the look!

I also give them credit for generally being able to weave distinct stories into one coherent plot, and how each sub-plot kinda drives the main plot. They kept rather faithful to the events of the book and only changed bits which were necessary to fit into the main plot, so I liked spotting the similarities between the book and the drama. It’s kinda like having 4 live-action movies rolled into one. And Ms Ma – Ms Marple? Ha ha ha, I love that. 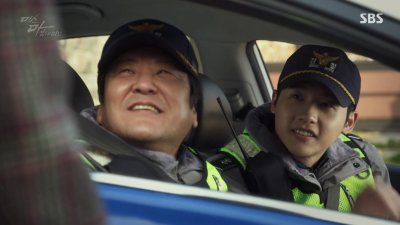 There were also some thought given to the setting and I appreciate how they purposefully draw Ms Ma into the village as well as for her to make some friends with the villagers who were simplistic but kind. I also liked how Eun Ji  came to Ms Ma and how they stayed as family in the end.

I think the show would have done better being a 12-14 episode series. Remove some of the angst, some of the fighting, some of Ms Ma’s emotional torture scenes and honestly, I feel like it could still have been a well-rounded story.

Ultimately, I think it wasn’t as great a watch as I expected, and I mostly stayed just to see the stories through. You might have a totally different experience though, depending on whether you read the books before, and whether you appreciate the different take on Ms Marple. As for me, I think I will stick to a good old book, with a cup of tea on a rainy afternoon.