THE ONLY THING I AM OBSESSED WITH RIGHT NOW

I have been quite out of the drama land and even I sort of got the wind of how hyped up people were about Descendants of the Sun even before it aired! I am so glad I decided to give it a shot because I like Song Joong Ki! You know how there are those dramas that amaze you with almost every single thing and they are rare gems that appear only once or twice a year? Even though it’s so early in 2016, I daresay this might just be one of my most favourite dramas.

This is just going to be a review of my thoughts in rambly-fashion (what’s new), so here we go!

I can’t really remember my exact thoughts last week with regard to the first two episodes but I know I was blown away. I watched them over the weekend and even waiting 4 days for Episode 3 was such a torture! Seriously, it usually takes me around 4 or 5 episodes to properly get into a drama, so having “drama blues” waiting for new episodes to come out is another level for me.

I don’t know what about the first two episodes made me like the show so much, but here’s a few obvious points – great, great acting from the entire cast, a good-looking and charming cast (*coughs* sorry about being superficial), the premise of the show, the way it was directed and the characterisation. I do think that it was pretty unrealistic to have a confused soldier amongst them (not sure what his name is? The guy that always asks questions like *where are we now?* dude isn’t destination like one of the basic information of any mission??) but I appreciate his role as a reflection of the viewer. Basically, he asks all the questions that we have and we hear the answers that help set us into context very quickly. I think that’s quite a smart move!

The acting is also awesome so far. To be honest, I was never really a fan of Song Hye Kyo. I haven’t watched any of her dramas in full, although I would term her as a ‘classic’ actress as she has acted in many of the timeless dramas like Autumn in my Heart and Full House. I’ve also never found her really pretty; she was just hmm okay to me, but this drama really blew me away with her natural looks and smiles!

There’s one thing I must really comment on and commend – and that’s the love relationship. If you have followed other recaps of mine before, you would know that I can be pretty skeptical about love-at-first-sights, love-within-2-episodes, and love-between-13-year-olds. Once in a while, someone with great acting convinces me of their love but I can’t really remember any example other than Moon that Embraces the Sun where Yeo Jin Goo and Kim Yoo Jung completely  persuaded me that they can truly love each other and that their love can last for 10 complete years. Anybody with lesser acting skills, and the show would have died on me.

Here, equally, I felt the chemistry between the couple from the very start. Complemented with the directing of the show, I am a fan of this relationship even before Episode 2 ends! I think they are clearly physically attracted to each other but it’s also more than that. Their dates show us how perfect they match with each other, until Si Jin gets torn away every time. The shower scene was so funny and lovable, and I really like it that they have deep conversations even though they barely know each other yet. The nature of Si Jin’s work plunges them straight into reality and harsh truth; there’s no time to dilly with flowers and chocolates.

And I love them even more come Episode 3 and 4! When Mo Yeon runs in to find Si Jin and when they reach another comfortable level after the tense surgery that had me dying. 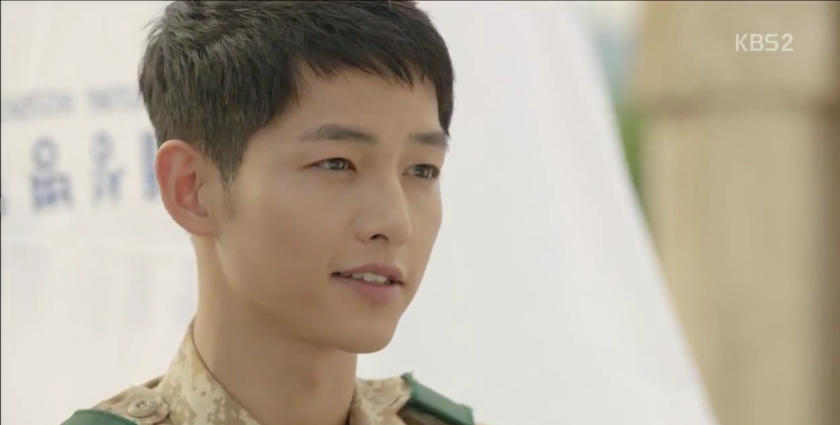 HAHA I must mention that I truly felt Mo Yeon’s agony when Si Jin used up that card to drive the car!! But I guess it’s in line with Si Jin’s character – he probably doesn’t want a free pass (hahahah literally) to things in life. He could have used that card to request for the VIP to request that his punishment be lifted, but that’s just not who he is.

Dae Young’s and Myeong Joo’s relationship is also growing on me, as we see more and more scenes of how they even got to know each other. It’s so sweet to see how Dae Young actually smiles slightly when he comments on the hilarity of the situation (but I would be just as pissed as Myeong Joo about the rumours!), how he sneakily suggests that she could turn rumours into fact, how he actually cares for her and how even though she was the one who stopped him, he was the one who hugged her.

I also like it that they show us an interaction between Myeong Joo and Si Jin – there’s no romance there at all; just lots of brotherly/sisterly affection and friendship. So Mo Yeon, don’t worry about any emotional love-triangle! But I can’t guarantee about the father. By the way, I didn’t realise Kim Woo Bin was Rachel in Heirs until I did a Wiki check. How awesome!! And she’s so pretty! (Already warned you that I’m superficial about that. Have I mentioned about me dying over Song Joong Ki’s looks? No? Okay.)

Then you should know I died inside in this scene, where Si Jin, looking really good in his uniform, turns and looks at Mo Yeon. How can Mo Yeon even think that he’s looking at the wine? He wants YOU and omygoodness, I don’t know if this is appropriate to point out in a review, but his desire is so strong, especially towards the end of this scene where his eyes flickered when she said that the movie reminded her of him. He’s like who cares about the wine. Oh and I must admit that I find it *cough* quite attractive how he said, “I know another way which I can drink it.” AHHHHH<3 I especially love it that we watched the scene through the window, partly because I’m a fan of anything to do with rain inside (in real life) and I think that the scene is quite beautifully shot!

I know some people might find it an issue that he kisses her without warning. If this wasn’t Si Jin (and by extension, Song Joong Ki), it might have been creepy and rude and disrespectful. But I guess it didn’t really feel like an issue to me at this point because I they clearly like each other.

Next episode, I hope to see Dae Young step up so that he can actually fly back to find Myeong Joo. If not, Myeong Joo’s efforts are for naught! Did you see her happy face as she was about to board the plane and her dismayed face when she spotted him there?

I also hope that Si Jin doesn’t die. I think death is actually an option here because the whole show can be pretty depressing and they might actually start killing people just to make the drama suit the setting of a war-torn country BUT I hope they don’t kill the two main male leads. I don’t think they would kill Mo Yeon and Myeong Joo so that’s safe, but I’m afraid Dae Young might die just so our couple can have their happy ending. Or Ki Beom. Or Onew. Nope, NO ONE should die. Sorry, but if this gives me our happy endings, I don’t mind the drama being slightly unrealistic haha.

This ended up being a pretty long review! Do let me know your thoughts if you are catching this gem!

P.S Check out my Episode 12 Recap and Episode 14 recap!